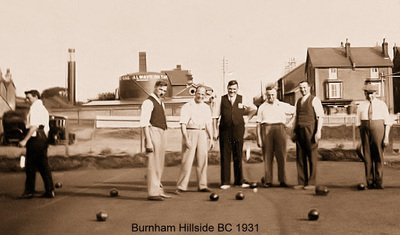 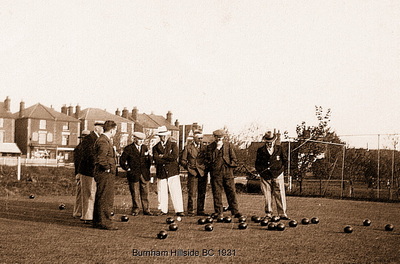 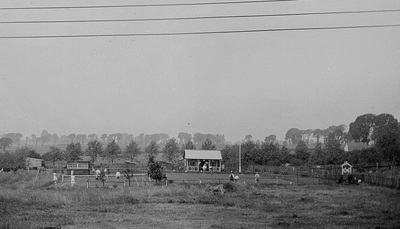 (Hover over the above three pictures to enlarge them) 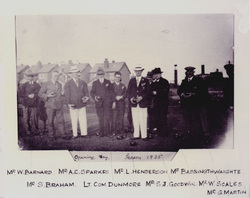 Some of the original members
Like many of such like institutions, the Burnham Hillside Bowls Club grew up from small beginnings. Mr A Sparkes originally built it almost opposite to his family butcher business. The Club, with only two rinks, was officially opened on 10th June 1931; however the first match was played on 9th June against Southminster, with Burnham winning by one shot.

The first clubhouse
The Club’s original “pavilion” was nothing more than a chicken house. The members had to go next door to draw their water and boil it up on a small primus stove in order to make an afternoon cup of tea. All of this was to change in 1934 when W H Hempstead built a pavilion that contained a kitchen and other facilities for the comfort of members. It was in this year, too, that a third rink was added to the green. Local interest in bowls gradually increased from this period onwards and the Club went from strength to strength. 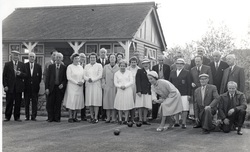 Our early Lady players
In 1953 a ladies section was formed. Instead of sitting on the side and watching the gentlemen try their skill, the members of the fair sex were now playing the game themselves. An outstanding lady player who started at Burnham Hillside was Mrs L A Sparkes, who was Captain of the first Ladies team and she won the Ladies Championship in 1955. Mrs Sparkes entered the Essex County Championships competitions and then she went on to compete in the Ladies section of the English Bowling Association.
Some questions arose in 1961 about the future ownership of the Club, so the members got together and raised sufficient funds to purchase the green and thus make it the Club’s own private property. In 1963 brick-built toilets and washing facilities were added for both ladies and gentlemen. The original three-rink green survived until 1977, when the Club President, Mr Sid Hull, persuaded the members to rebuild the Clubhouse and have a six-rink green.

The garden area acquired by the club
Originally the intention was to sell the old green for development into a small housing estate, but this idea was not acceptable as far as the residents of Hillside Road were concerned, so an alternative proposal was put forward. As a result, the residents whose properties backed onto the existing bowls green would part with 66 feet of their gardens in return for a cash settlement. Work started on the green in 1978 after the original Clubhouse was towed away and demolished. 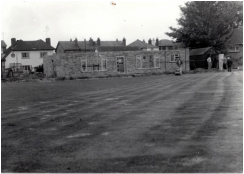 Original construction of the current clubhouse
Preparation of the green went ahead, but those people employed to drain the plot of land and prepare the top surface for seeding were unaware of the requirements for bowls greens. As a result the Club was to strive for many years afterwards to get a good green.

During this building period, most of the Club members became attached to Maldon, Southminster or Tillingham Bowls Clubs as subsidiary members and continued to bowl.

The majority of the men spent much of their time by helping to build the Clubhouse, but at the same time raising money in various ways to help fund the project.  Professionals were brought in for some of the interior walls and floor but the Club’s in-house “experts” did much of the rest of the construction work.

The interior of the Clubhouse was roughly drawn up and approved. But what should have been the Visitors Changing Room gave way in favour of a bar that soon became very popular with the vast majority of the members and visitors.
The green was opened in May 1980, but there were drainage problems from the outset. It was to be quite some time before the drainage problem had been satisfactorily resolved.

Despite these difficulties, the Club had a membership of 150, being 100 full bowling members and about 50 social members. So by 1983 it was once again acknowledged that there was a need to extend the Clubhouse again. 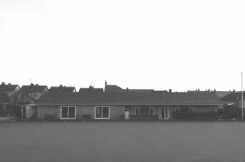 Current extended clubhouse
As before, the members came up with a variety of ways to raise the funds necessary to pay for the new extension. They sold bricks at a shilling a time, formed a 100 Club, negotiated with the brewers and acquired loans from members. One local business provided the bricks for the extension and another local business allowed two of its shipwrights to spend a couple of their working days building the bar.The new Clubhouse was opened in 1984. The Club has gone from strength to strength since then. Burnham Hillside’s green is now rated as one of the best in the Chelmsford area, thanks to the efforts of Graham Pinch, the green keeper, and his team of helpers.
Powered by