In the National Women's Senior Singles Comp. BHBC's Dawn Hood had a home game against an opponant from Dunmow. Dawn had a very good game and won 21/5. Sadly though in the C&D Mixed Pairs Comp. 2nd round Val Hyam and Kevin Olley lost away to a duo at Chelmsford BC 27/19.
Good Friendly at RHP:

Four mixed Triples visited RHP BC on Sunday 26th June to play in a friendly. At one point it looked as though it was an even match but once the Burnham bowlers got used to the Green they strated to take the lead. In the end they won on all four Triples and had an overall winning score of 102/49.
John Wilson's President's Day a Great Success:

On Saturday 25th June the Annual Burnham Hillside Bowls Club President's Day took place. The Club's President John Wilson had selected his team of six rinks of various bowlers from BHBC, Southminster & Tillingham Bowls Clubs, with Burnham’s Karen Hull as his Captain. They played against a six-rink side of BHBC bowlers Captained by Sid Curtis. The Green and weather were excellent and some of the bowling wasn't bad either!  This event was well attended and great enjoyment was had by all. There was lots of laughing, joking and appropriate socialising throughout the games. As part of the day's activities a raffle was held for numerous prizes donated by some of the bowlers. As for the outcome of the game, the President John Wilson’s side won. The BHBC side did manage to win on two of the six rinks but the President put out a very strong side so had a convincing over win of 137/86. After the game all the players sat down to an excellent two course buffet meal suitably provided by outside caterers followed by speeches from the two Captains and the President which included a thanks to all the helpers on the day for making it such a successful one and to Wendy Parkhouse who served behind the bar all day. In the Essex County Ladies Top Club BHBC played against Fairwood BC over four disciplines on Saturday 25th June. They played an excellent game and after all the games were finished each side had won two of the disciplines which meant the game had to be decided on the overall shots and when these were added up it was BHBC who won by 6 shots with the score being 74/68. The Burnham ladies now go on to the quarter finals.

Very Close Game Against Maldon 'A':

In the Chelmsford & District BA Atkinson Shield Competition Burnham's 'A' Team from the Wednesday night 2nd Division played Maldon 'A' from the 1st Division in a home game over three rinks. In the first half of the game Burnham did very well and had a good lead but in the 2nd half Maldon game back and after the last but one end Burnham were 1 shot in front overall. Sadly Maldon managed to win on all three rinks on the last end giving them an overall winning score of 63/55. It was an excellent effort though by the Burnham players.
Ladies Had a Good Win Against Tillingham:

BHBC Ladies played a home friendly on Wednesday 22nd June over two triples. The pace of the Green was good and the Burnham Ladies bowled well by winning on both rinks. the final overall score was 37/27 to BHBC.

With the Chelmsford & District BA Wednesday Night Leagues reaching the halfway stage on Wednesday 15th June Burnham's 'A' and 'B' teams had good wins to consolidate their top position in their respective leagues. Team 'A' played away to Great Baddow 'B' and had a win of 10/0 and the 'B' team, away to Ingatestone won 8/2.
Competition Result:

A Burnham Trio (Len Hyam, Tony Rowling and Nigel Norfolk) played away at Great Baddow in the 1st round of the Chelmsford & District BA Triples Competition on Monday 13th June and came away with a good win of 23/14. Not so fortunate was Kevin Brown who played in the 2nd round of the Essex County Singles Competition against a Writtle opponent who beat him 21/14.
Narrow Miss for the ECBA Double Fours:

BHBC's 'A' & 'B' teams narrowly missed out in progressing to the 2nd round of the Essex County BA Double Fours Competition. The game plays with one fours playing at home and one away and the winner is the one with the highest aggregate. Burnham's 'A' team played Great Baddow 'A' and in the away game they did well by winning 20/13 but in the home game they lost 14/23 so sadly overall Great Baddow won by 2 shots. The 'B' team played against Great Bocking and at home they lost by 5 shots 18/23 but did manage a win away 21/19 but sadly lost overall  by 3 shots.
Not the Best of Results at Great Wakering!:

3 mixed triples from BHBC made their way to an away game at Great Wakering BC on the 9th June. It is a tricky Green to bowl on and on this occasion our Burnham bowlers could not master it. After 18 ends all three triples were won by Great Wakering, 16/24, 10/18 & 10/20.  Perhaps when Great Wakering visit Burnham's Green the locals can get their own back?
ECBA Group 3 Reach the Final for Another Year:

Over the last three Sundays ECBA Group 3 have been playing in the Ashford Cup League Competition against three other Groups in the County. Each game is of six rinks and for each rink won two league points are awarded. Group 3 have done well with winning points over the three Sundays of 12/0, 8/4 and 11/1 and have finished top of their league and will now play in the Final on 31st July against the winners of the other Group League. We are proud to say that three of the Group 3 squad are BHBC bowlers Neville Evans, Kevin Brown and Sid Curtis so well done to them.
C&D First Round Mixed Pairs Results: If you click on any of the photos a larger image will appear! BHBC's Kevin Brown had an away trip to Falcon BC on 2nd June to play in the Chelmsford & District BA Two Wood Singles. He had a good game and came away with a win of 21/15 and now moves on to the 2nd round.
BHBC Wednesday Night Teams Continue Good Results:

Both Burnham Hillside's  A & B teams played their Chelmsford & District Wednesday night league game on 1st June. The A team were away at Maldon where they won 8/2 and the B team were at home against Falcon C who did one better by beating Falcon 10/0. Another two good results which keeps both teams on top of their respective leagues.
Apologies to the Ladies Re a Friendly Result:

I reported earlier that on Wednesday 11th May BHBC ladies played in a friendly at Maldon BC over two triples and that Maldon won overall 19/31. This however was incorrect as I (Ed) had read the cards wrong. The correct result was that when the game was abandened due to inclement weather the Burnham ladies were winning on both rinks and therefore won 19/11. So Sorry ladies......Ed.
Tom Filtness Day:

Burnham Hillside BC held its annual internal Tom Filtness Competition on Saturday 28th May run by the Club’s Competition Secretaries Jeanette Wilson and Eleanor Bridge. 14 triples teams played through the day across 4 separate games of 6 ends with the weather holding up well. The day started off with a Spider which was won by John Greenane who was presented with a bottle of Grouse Whisky, donated by John Wilson. Sid Curtis sold the raffle tickets and Terry Sims did the calculations for all the scoring of the games. Numerous Bar helpers supplied liquid refreshments, Nigel Barnes, Wendy Parkhouse Brian Holloway to name but a few with tea/coffee and cakes made by Chris Reynolds/Jeanette Wilson served up by Maggie Foster, Sid Rodwell and Belinda Brown. It was a great day and the eventual winners on the day were  John Wilson, Lorna Harker and Michael Bridge who were presented with the winners Shield by the Club’s Chairman Kevin Olley.
Excellent Spring Pairs Competition:

On Monday the 2nd May 24 pairs teams from Burnham Hillside Bowls Club played in the club’s annual Spring Pairs Competition for the Blay Cup, which was organised by Jeanette Wilson & Eleanor Bridge the club’s Competition Secretary’s. There were two leagues of 12 teams respectively and each team played three games of 8 ends. Plenty of chat and joviality took place making this day, as always, successful. During the day a bar service was available covered by various bowlers who we thank along Janet Johnson and Maggie Foster who kept a constant flow of tea/coffee and homemade on the go. Our thanks also to Jeanette Wilson, Christine Reynolds, Dennis Bonning and Wendy Parkhouse for making and donating all the cakes. Also, thanks of course to all those other helpers on the day.

To decide the eventual winners a final was played between the two winning teams from each of the leagues and in the end David Gamble & John Greenane beat John Johnson & Tony Callan 9/5. Each of the finalist were presented with a monitory award and the winners were also presented with the Blay Cup by Graham Beale the Son-in-Law of Val Hackney (previously Val Blay).
​
(Enjoy the pictures below)

Well, here's a view of the Burnham Green that you don't often see!

If you click on the image you will see a larger copy. 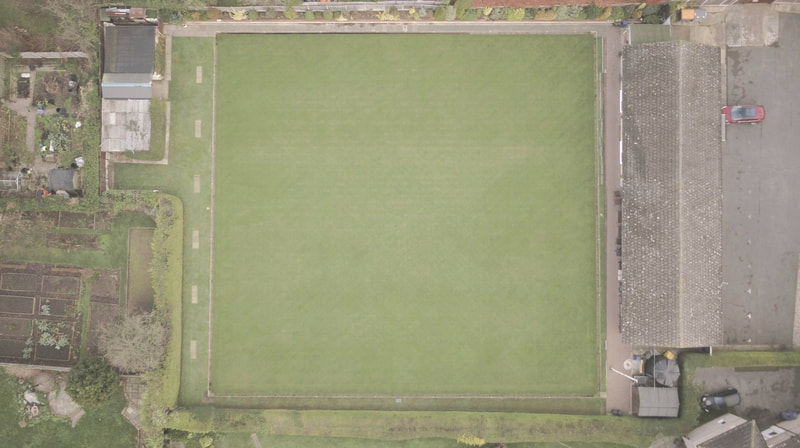 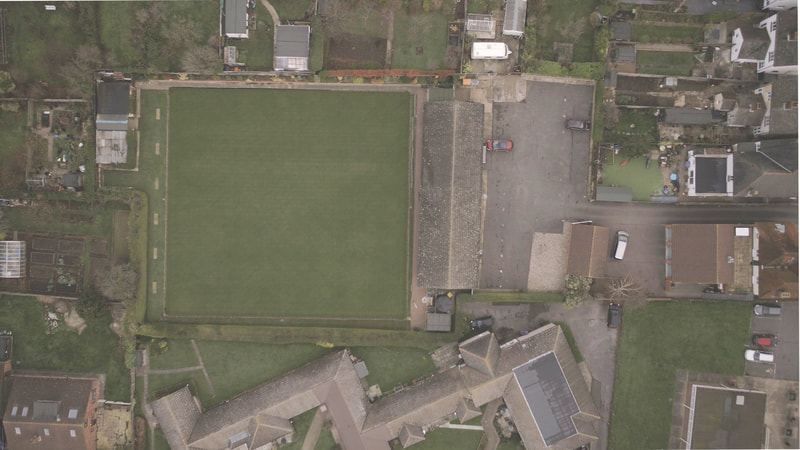 A new link has been put on the Link page above directing you to a website that has a comprehensive Beginners Guide to Bowling. Take a look it's pretty good..... 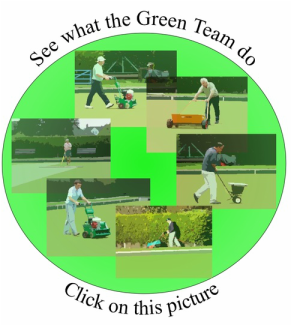